One of the things I really love about Kickstarter, is its variety of game campaigns. You never notice how many there actually are until you start writing about them; it’s crazy. So, since I’ve been writing a lot about lighter games, I thought it would be a good time to switch gears, and feature something a little bit heavier. I actually came across this particular game on Facebook. Druid City Games runs an awesome page completely dedicated to board game Kickstarter spotlights. They have discussions, contests, and more, so you should check them out. Anyway, I saw a link for this game’s Kickstarter campaign while perusing the spotlights page and it immediately got my attention.

I’m not going to lie, I really want this one. Like, really badly. I’ve been looking for a really good heavy game to add to our collection; I’ve got some medium games that I will be getting over the next few months, but nothing compares. I’m looking forward to getting some games I can actually win too. I don’t know what it is, but I cannot win lighter games (at least not consistently). I love them, but I just can’t. Give me a heavy game, with a bunch of stuff to keep track of, and I do just fine. Makes no sense whatsoever. This game is going to be a monster, and I’m so ready to clear my dining table and bring this bad boy out. I am ready to frown, and furrow my brow with analysis paralysis… J/K, I’m not one of those gamers.

A New And Desolate Earth

In Anachrony, you are playing the leader of one of four ideological paths, vying for dominance in a barren and futuristic Earth.

Earth, made desolate on the Day of Purgation, is now a wasteland. Survivors created domed cities to protect them from the harsh environs and to start anew. Water and resources are scarce, but the World Capital has thrived. As the population grew, it became clear that the four paths would take some of their followers, and branch out from the World Capital to create their own cities and havens. World Council be damned.

As the people of this new Earth commemorate the Day of Purgation, with monuments of the four paths, news of Earth’s future is revealed: An asteroid is headed to Earth. As it turns out, the monuments can also open wormholes, allowing the transport of resources from the future to be brought back to help prepare for the asteroid to come. As a leader of one of the four paths, you are doing all you can to prepare for the asteroid’s arrival and to get the most people to evacuate to your city. If you’d like to know more about the story behind this world, you can check out a sweet timeline on the game website.

At its core, Anachrony is a Euro-style, worker placement game. It also includes elements of strategy and resource management. The game will take place over a series of eras, leading up to the impact of the asteroid and after. The four eras before the asteroid hits seem to be focused on preparing for the impact, while the three eras after, are focused on evacuating the World Capital and getting people into your city. The goal of the game is to have your city become the new World Capital.

If you’d like a closer look at the rules, Mindclash Games provides a link on their campaign page, or you can click here. And as usual, Rahdo does an amazing job at running through the gameplay; you can check out his runthrough here.

What’s In The Box

The game in all its glory. Photo Credit: Anachrony Kickstarter campaign page

This game is packed full of components. The basic version of the game will include:

The other option they offer is the Leader Box option. With this, you get everything above and a box sleeve of your favorite faction. You will also get:

The $5 level will get you a full colour, print and play copy of the game. I’ve noticed this option on a lot of game campaigns lately, and it seems to me that it is becoming the standard. Which is fine, because I  am definitely in support of this option on most campaigns. Now when it comes to this particular game, unless you have some serious PNP making skills, or have a really good printer, this might not do the game justice, but as an option for someone really dedicated, this will work.

If you are interested in getting just the base game, plus all stretch goals, you can pledge $59. This version of the game still comes with tons of components and one of the modules, so if you aren’t ready to spend $79 on a game, this is still a great option. There are four different $79 levels to choose from, one for each of the four paths: Harmony, Dominance, Progress and Salvation. So, if you want a Leader Box, just choose the pledge level of the path banner you want on your box sleeve.

I’m going to side with Mindclash here, and point out that the $79 level is really the best option. Now, I don’t always agree that the more expensive level is worth it, but in this case it absolutely is. The miniatures are reason enough to back at this level. Plus you get both modules, all of the regular stretch goals, as well as some special path goals. If you have the funds, this is definitely the level to back at, and as of right now 91% of current backers are pledged at this level.

There are a lot of stretch goals for this game, plus some special stretch goals related to the paths/Leader Boxes. So for the sake of space, I will just list them and note if they have been reached or not (completed goals will have a purple diamond next to them). These are the main stretch goals:

Mindclash has also developed a set of stretch goals based on how many people back each of the four different paths for their Leader Boxes. Each path will unlock goals separately, but all unlocked goals will be included in each Leader Box copy, not just the goals of the respective path. You can check out their progress on the campaign page.

They are also offering you a chance to add on their first game, Trickerion: Legends of Illusion, for $50.  You can also add its expansion, Trickerion: Dahlgaard’s Gifts, for $15. Rahdo has also reviewed this game, so you can see his final thoughts here. If you add these on, you will get them before your copy of Anachrony ships out. This is really awesome, because you will have something to play while you wait for your copy of Anachrony to get to you (estimated date for backers to receive Anachrony is February 2017). According to the campaign page, they are looking to get Trickerion and its expansion out to backers in July.

Mindclash Games is a three-man, Hungarian game company, formed in 2013. Their first game, Trickerion, debuted on Kickstarter last year and was a huge success. Anachrony seems to be following the same path to greatness. From what I have seen, Mindclash puts an inordinate amount of detail into their games, and they really seem to grasp the immersiveness that so many other games seem to lack. The minis may be a be a huge draw for some people, or even the type of game, but for me, I want to feel like I am part of the world I am playing in, and I really think I’m going to get that with their games.

The more I read about this game and all that it offers, the more I want it. My husband has probably already gotten annoyed with how much I have talked about it (I’m doing my best to convince him that this is a NEED and not a WANT). I really feel like this game is going to offer so much. Play variation alone, is going to be amazing. With the drafting options, extra goal cards, and the modules, it should feel different with every playthrough. This game is heavy and full of substance, which is a huge sell for me. Anyone who is a fan of heavy Euros will probably love this game. 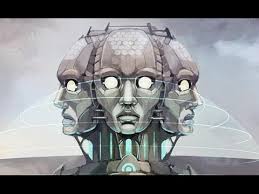 The fact that they are also adding in a solo play variant, is just awesome. I’m not into playing board games solo, but a lot of people are, and I think that the Chronobot addition will be great for those people. A lot of companies seem to be going for that solo play variant. For example, the Tesla vs. Edison: Powering Up! expansion also features a solo variant, which is going to bring a really cool new experience to that game. The solo play variants should definitely be seen as a plus, and we will probably be seeing more of that from upcoming games.

As a downside, this game is going to have a long production time, which is a no go for some people. Personally, I’m okay with waiting nine months, especially if I know that the time is being spent making it a quality game. I can’t tell you how many times things have been published quickly, and have been riddled with either production issues, or the game just doesn’t live up to its promises. I don’t think we will see that issue here.

If you’d like an opinion from someone who has already played the game, check out Rahdo’s final thoughts.

As I am writing this, Anachrony is 552% funded and there are 13 days left in the campaign. That’s plenty of time to set some money aside to back this one for yourself. I know I will be.

Was this helpful to you? What other information would you like to have seen? Have suggestions for future Spotlights? Would you like me to do a review/preview? Please leave a comment below, or head over to my contact page to send me an email, tweet or Facebook message. Thanks for reading!